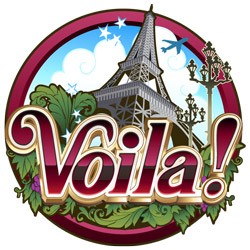 Voila (Slot Game) was released on 5th June 2010 by Microgaming. The game has 5 reels and 243 paylines. The graphics of the game are bright and colorful and are based on the theme of a Romantic holiday Paris. The game has French instrumental backround music with usual gameplay sounds of a slot machine. The symbols on the game are theme oriented and include Eiffel Tower, Lovers, A couple in car, a restraint, fountain, A roadside bistro bar, and a couple of French delicacies.. The special feature of this game is Free spin Round.

The Romantic themed game has five reels and 243 paylines. The coin size varies from 0.01 to 0.20 per pay line, and wager 1 up to 20 coins per payline bet. The minimum bet amount is 0.01 and the maximum bet amount is 150.00 per spin. The maximum jackpot payout of this game is 1500 coins per line bet. The game features Wild symbol, Scatter symbol, Free spin feature and Gamble feature.

When 3 or more scattered Bonus symbols appear anywhere on the reels player is awarded 20 free spins with 2x multiplier. During the free spins winnings are doubled and the free spins feature can also be retriggered.
Gamble Game

Gamble feature of the game can be activated by any win, player can choose to play the game or skip it. Winnings can be doubled in the game by selecting the right color or quadrupled by guessing the correct suit. The gamble limit is set at an amount limit or five gambles per game.

This game is based on Paris and has a romantic theme, the background image of the game depicts the animated pictures of French countryside. The game tries to capture the romanticism of Paris and all the symbols on reels carry that particular theme and include Eiffel Tower, Lovers, a couple shopping, a restraint, a roadside bistro bar, and a couple french delicacies like Duck l’ Orange, Lobster, Snails, Cheese and Wine and fruit Frappes. The name of the game is inspired by a frenchword named ‘Voila’ which in French literally means “see there” and in English it is used when something is being presented or shown to someone.