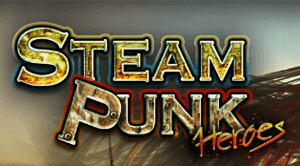 Steampunk Heroes (Slot Game) was released in 17th April 2013 by Microgaming. The Science fiction themed game contains a set of 5 reels and 25 paylines. The game is based on the theme of a Popular Sci-Fi subgenre called Steam punk. The visuals of the game features quality graphics with detailed art styles and textures which are based on the theme of a classic fruit machine. The game features a catchy constant music in the background, which sounds like the Victorian era music, with a blend of usual sounds of a slot machine. The symbols on the reels are theme oriented and include Steam punk Girl, Steam punk Boy, Steam Punk Lion, Motorcycle, and high value card symbols ranging from Ace to number 10. The highlight of the game is Free Spin Feature.

The game has 5 reels and 25 paylines. The coin size varies in the denominations of 0.01 up to 0.20 per pay line, and wager 1 up to 10 coins per payline bet. The minimum bet amount is 0.01 and the maximum bet amount is 50.00 per spin. The Jackpot Payout is of 2000 coins. The Game Features Scatter symbols, Wild Multiplier symbols, and a Free Spin Bonus Feature.

The Steam Punk Heroes video slot machine game offers the Skill Stop Feature.
Skill Stop Spin Feature lets player stop the spinning reel with just a touch of a button by clicking the "Spin/Stop Button". When player presses the "Stop/Spin Button" all of the reels spinning will stop helping to create "Winning Combinations" and/or trigger the Bonus Features.

This game is based on the theme of Science Fictions subgenre known as Steam Punk,Steampunk refers to a sub-genre of science fiction inspired by the Victorian era and period of industrialization in the West. Typical series include steam powered machinery or a post-apocalyptic future. All the graphics and sounds are designed in tandem with the same theme.