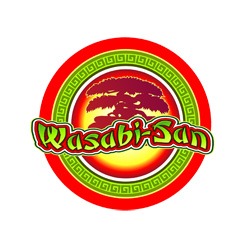 Wasabi San (Slot Game) was released in October 2005 by Microgaming. The game has 5 reels and 15 paylines. The graphics of the game are bright and colorful and are based on the theme of Japanese Sushi. The game has traditional Japanese instrumental backround music with usual gameplay sounds of a slot machine. The symbols on the game are theme oriented and include different kinds of sushi like California Handroll, Salmon Roe, Sake, Tuna Maki and California Roll, and some Japanese characters like sushi chef, waitress named Sue Shi , Mr. Washaman and a bonsai tree . The special feature of this game is Free spin Round.

The Sushi themed game has five reels and 15 paylines. The coin size varies in denominations of 0.01 up to 1.00 per pay line, and wager 1 up to 5 coins per payline bet. The minimum bet amount is 0.01 and the maximum bet amount is 75.00 per spin. game features Scatter symbols, Wild symbols, Fish Market Bonus Feature, and a Free Spin Bonus Round game with a 3x time's multiplier value for all winning combinations.

Three or more Wasabi scatter symbols scattered anywhere on the five reels activates the Free Spin Bonus Round game and player is awarded 10 Free Spins; all winning combinations during the Free Spin games are "tripled. The free spins feature can also be retriggered.

Three or more Puffer Fish scatter symbols scattered anywhere in consecutive order and on an active payline triggers the Fish Market Bonus Feature game. The purpose of the game is to choose fish to gives the highest Bonus Prize amounts. Twelve fish are displayed; behind each fish is a random Bonus Prize value. The number of Fish that can be chosen depends on how many Puffer Fish activated the game.