Below you will find a list of the best Pragmatic Play online casinos recommended by Casinoslots NZ as well as reviews of Top-10 most popular online pokies by Pragmatic Play in New Zealand. Pragmatic Play casinos are also featured in the following reviews:

The iGaming industry is expanding rapidly, throwing out a tremendous rivalry in terms of online casino content. Many of the renown gaming developers started out producing titles for land-based casinos. This is not the case with Pragmatic Play. Great things start small. It’s relatively young, nevertheless, the company’s technologies have seen a lot of changes within its short history so far. Nowadays Pragmatic Play maintains a pretty decent reputation in the world of online gambling, having created an image of proactive and promising business that is looking into the future.

The story of this software company began in 2015 and is inextricably linked with the now defunct Topgame Technology company, established back in 2007 with headquarters in Panama. The team of professionals that started out the new business were already competent in gambling content development, since Topgame Technology also dealt with iGaming software and even owned a bunch of online casinos. Anyways, the Pamaniam provider was doomed to failure, as its activity fell on the dawn of online gambling, so they used such outdated technologies as downloadable games and Flash-based content. Eventually, in 2015, a group of investors purchased Topgame Technology and this is how Pragmatic Play brand was born. At first, the studio’s collection could not boast an ample amount of options: players could only choose from a simplistic downloadable content only in English. However, time has passed with great progress. They gradually started to have their games certified for use on various online platforms that incorporated iGaming products from multiple software developers. Here comes the need to adapt, to initiale a language support and world currencies compatibility. Their applications finally expanded beyond Windows, Pragmatic Play introduced it’s titles to Mac users and provided instant play mode. The new stage began with the rebranding, modernization of old-fashioned games and transferring them into HTML5 which allowed Pragmatic Play to successfully compete with numerous rivals in the industry. In 2019, the Pragmatic Play Enhance platform was released. The product is designed as a strong marketing tool, allowing casino operators to build in all the necessary features like tournaments, attractive bonuses and other promo elements to motivate customers. The promotional tool is managed out through a single API for updating any game from the developer.

Why New Zealand players should choose pokies from Pragmatic Play

As a new player in the gambling arena, the Pragmatic Play team paid much effort to become one of the major game developers today. Its games have proven their quality with Q.U.I.N.E.L, BMM Testlabs and Gaming Labs tests.  The company holds licenses granted by the UK Gambling Commission, Malta Gaming Authority, Curacao eGaming, and Gaming Board for the Bahamas, making Pragmatic Play’s titles widely spread throughout the entire industry. They came into the scene as video slots developers, now they feature table games, scratch cards, and video poker as well. The company boasts a portfolio of 150+ games that are now available through numerous online casino operators in more than 80 countries across the globe. Pragmatic Play grew extremely fast, the company managed to catch the wave and the efforts didn’t go unnoticed. The gaming audience loves them, which is proved by several awards and nominations in the industry. In 2017, for instance, Pragmatic Play became a winner in “Software Rising Star” category at EGR B2B Awards and “Rising Star” at the Videoslots Awards, got the acknowledgment in “Innovation in Slot Provision” at the EGR B2B Awards 2018, “Best Provider 2019” from AskGamblers. Pragmatic Play wins a title in “Innovation in mobile” at SBC Awards 2020 and these are just a few of the company’s achievements.

The evolution of the company also required the introduction of mobile platforms and the managing team made it their priority, adding a new mobile client which helped their competitiveness in this online gambling race. Since then games, produced by Pragmatic Play, are mobile-friendly, all due to the HTML5 technology - the game production process goes smooth for both desktop and mobile variants, players can access the games from wherever they are just on the go, regardless of the device or operating system. The software company got its recognition for that, winning “Innovation in mobile” at SBC Awards 2020.

Pragmatic Play has an impressive number of games that reached 200 in 2021 with video slots accounting for the major half of them. Players are able to wallow in the atmosphere of table games - types of roulette, blackjack, baccarat - video poker, bingo, keno and scratchcards. The software developer has succeeded in Live Dealer casino entertainment as well. The category comprises 7 types of roulette, 2 types of baccarat, blackjack, and sic bo.

Malta-based Pragmatic Play is in close partnership with other studios, some titles are created in collaboration with Visionary iGaming, Ezugi and Parlay Games - anything to get their clients satisfied.  All games are localized into 30 languages ​​and are both destined for mobile and desktop users. The majority of slot machines are available to play for free without registration, thanks to official demos.

The game studio now offers close to 100 pokies which are diverse in themes and play styles, from classic 3-reels to 5-reel video pokies, progressive jackpot slots and so on. We can name a few of the most noteworthy ones.

Great Rhino Megaways. The first Pragmatic Play pokie machine to use Megaways technology. The number of possible combos on a non-standard playing field with 6 reels is 200,704 to be precise! The animal-themed slot is not just about to please players with free spins, but also allows you to buy them with an additional bet. High volatility and RTP of 96,58% make it worth trying out. 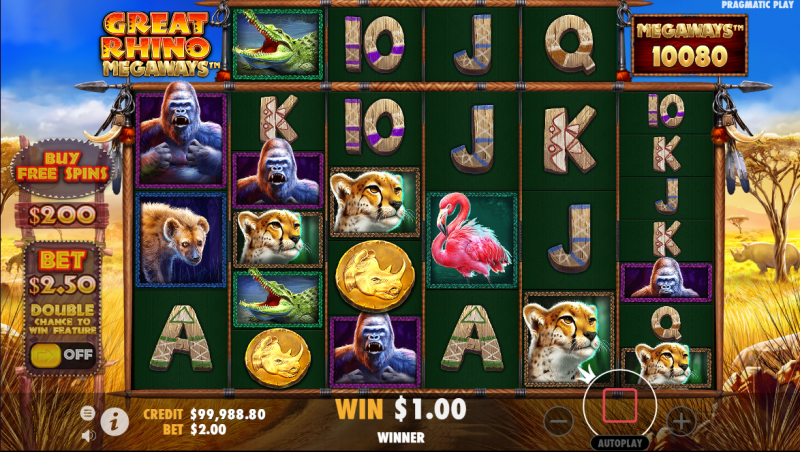 Wolf Gold. The most recognized video pokie machine of the software developer, which became their first jackpot slot. The game features 25 paylines, options to set up coin sizes and values. Spectacular graphics makes it one of the most attractive slots, adding special features like respins, free spins, giant symbols and the main prize. The jackpot is played at once on 3 levels.

Extra Juicy. Extra Juicy machine could be a good choice for players who are keen on classic fruit pokies. Volatile, offering 10 paylines on their 5 reels is very exciting to spin. Pragmatic Play prepared some nice features here like free spins round with a multiplier increasing by 1 each time you hit the spin. At the end, the reward can shoot up to 60 times.

Pragmatic Play is a relatively young software developer, being established in 2015, the company has already come a long way and achieved its international recognition. The company’s products are licensed by the biggest iGambling regulators that makes it possible to access them in vast amounts of countries across the world. The fair play of the games are also tested by independent auditors with special attention to encryption of personal data, players safety and trustworthiness. The studio does not focus on several game types or themes, the collection boasts of diverse, high quality content, although their number is rather limited compared to more experienced moguls in the industry. Company uses HTML5 technology and easily integrates the games to online casino sites. Pragmatic Play is appreciated by gamblers who look for unique themes, bonuses, clear settings and fair gameplay.

Another casino from PlayAmo partners network. CookieCasino scored the highest on the following components: Trustworthiness (100/100), Casino deposit and withdrawals (86/100).

Acclaimed Mobile casino of the year 2020. NZ dollar is available. Casino bonus spins are massive and the players value of bonus is good. Its huge selection of online pokies and weekly offers makes it highly commended for daily Online Pokies players.

Rated Top percentile by us and 100% trustworthy MGA licensed Maneki offers 1133 online slots from popular software providers as well as 200% sign up casino bonus with 33 Free Spins to play in New Zealand dollars.

A super secure online casino, a new MULTI-PLAY feature to play up to 4 games simultaneously on one MULTI-PLAY screen. Great welcome offer of 200% match up to $500 plus 50 free spins on your 1st deposit

One of the best online casinos in New Zealand. Certified and tracked for compliance. Withdrawal time has been verified to take less than 24 hours. Live chat is open 24/7. $10 min deposit

It's a good casino with great various banking methods and fast payouts, no cashout limits.

EmuCasino has a good sign up bonus (match up + no deposit free spins) with comfortable wagering, high max bet and no restrictions on games to play. Also, they have a good selection of games as well as a good banking