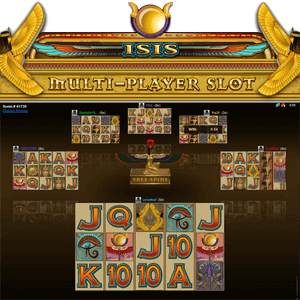 Isis (Multiplayer) (Slot Game) was released in 2012 by Microgaming. This ancient Egypt themed multiplayer slot game has 5 reels and 40 paylines. The graphics of the game are inspired by the theme of ancient Egyptian Goddess of motherhood and fertility, known as Isis. The symbols on the reels include Hawk as the scatter, the Isis as the wild, Eye of Horus, Royal Scepters, Sarcophagus, Knoptic Vase and Lotus Carving and other high value card symbols ranging from Ace to number 10 . In the background the game has its own composed Egyptian-themed music track that loops. The highlight of the game is Multiplayer feature.Multiplayer Feature Multiplayer Slots are community slots games where players play in a common game room, without competing against each other for prizes. Players can chat with other players during the game. Up to Six players are allowed in a common room. In this feature if one player in the room triggers the free spin, it is triggered for all the players in the room simultaneously; provided they qualify for it.

The Isis is the Wild symbol; it means that it acts as a substitute for all symbols except for Hawk Symbols and Free Spins Multiplier.

This feature is activated when two or more Hawk Symbols are scattered anywhere on reels 1 and 5, a Bonus multiplier value is required to play this game, which is awarded when two or more Free Spins Multiplier symbols appears on reels.
In this game all players in the game room that qualify to play this game are awarded 12 free spins bonus game, and al regular wins are multiplied by the accumulated bonus multiplier values. It can also be retriggered.

The theme of Isis is based upon Isis, the Egyptian Goddess of motherhood, magic and fertility.

Isis was worshipped as the patroness of nature and magic as well as the ideal mother and wife. Isis is oftentimes described as the mother of Horus, the hawk-headed God of protection and war. She is also known to be the Goddess of children and the protector of the dead.