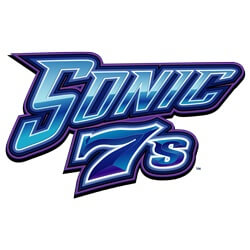 Power Spins Sonic 7s (Slot Game) was released on 10th June 2011 by Microgaming. The game has a set of 5 reels and 9 paylines. The graphics of the game have a retro look with bright blue neon theme and number 7. The symbols on the reels include Sonic Symbol, Scatter Symbol, Blue Red and white Seven, 3-Bar, 2-Bar, 1-Bar, Bell and Cherries. In the background the game has an electrifying music along with some authentic theme oriented gameplay sound effects that loop. The highlight of the game is the Power Spin Feature.

This slot game has 5 reels and 9 paylines. The coin size varies in the denominations of 0.01 up to 0.50 per pay line, and wager 1 up to 10 coins per payline bet. The minimum bet amount is 0.01 and the maximum bet amount is 45.00 per spin. The maximum payout in the regular game is 100,000 coins per line bet. The game features Scatter symbols, Wild symbols, and the Power Spins Feature with up to a 8x time's multiplier value for winning combinations.

The Sonic Logo symbol is the wild symbol in the game and acts as a substitute for all other symbols except the scatter symbol to complete any winning combinations.

This game is based on electricity and it is portrayed emanating from the number 7. The neon and bright background of the game depicts the energy transformation and the effects which takes place while doing so.