Football Rules was released in May 2007 by Playtech. The slot game has 5 reels and 25 paylines. The visuals of the game feature high quality graphics in animated style. The game theme is based on Football Game. In the background, game has doesn’t have constant music but it has usual slot machine sound along with the whistle that could be heard during any win. The symbols on the reels are theme oriented and include Wild Fan, Goalkeeper, Referee, 10 Jersey, 1 Jersey, 11 Jersey, 2 Jersey, 7 Jersey and scatter. The highlight of the game is the Football Penalty Shootout Bonus Feature .Jackpot:The Progressive Jackpot feature in this Playtech slot game is known as Dollar Ball Progressive Jackpot; in this game player picks 5 numbers out of 49. Then once the player starts playing the game, five numbers will be drawn randomly. The more numbers matching the selected, the more the player wins. If all five numbers match, player wins the Dollar Ball Progressive Jackpot.

This football themed slot game has 5 reels and 25 paylines. The coin size varies in the denominations of 0.01 up to 5.00 per pay line bet, and wager is 1 to 10 coins per line bet. The minimum bet amount is 0.01 and the maximum bet amount is 1250.00 per spin. The Jackpot Payout is of 10,000 credits per bet line. The game features Scatter symbol, Wild symbols, Football Penalty Shootout Bonus Feature and Dollar Progressive Jackpot. 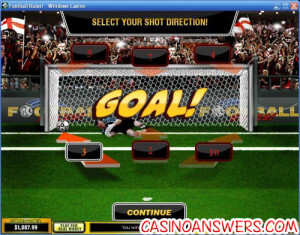 Football Penalty Shootout Bonus Feature game gets activated when Football Fan Bonus symbol scattered anywhere on 1 to 5 reels. The Wild Fan symbol does not substitute for the Football Fan Bonus symbol or to activate the Football Penalty Shootout Bonus Feature game. During the gameplay, player has to choose Football symbol, behind Football symbol there is a number of Free Spins. Here, player can score a goal in shootout to reveal a multiplier value to use in the Free Spin Bonus Round games.

In this feature all the bets and paylines played by the player are as same as in the Football Penalty Shootout Game feature. During this game all control buttons are disabled during the Free Spins including pay-line selectors. During the gameplay, player will be awarded with random number of Free Spins.

This game is based on the theme of Football Match. International Federation of Association Football (FIFA) organizes the game in every 4th year known as FIFA world cup. All the symbols of the game are bright, colorful and goes well with the theme.