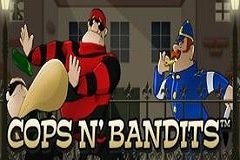 Cops N’ Bandits was released in 2012 by Playtech. The game has set of 5 reels and 30 Paylines. The graphics of the game are clear and simple based on the theme Police and Bandit chase. The symbol of the game are theme oriented and includes Money Bag, Hand Cuffs, Police Badge, Policeman, Green Thief, Red Thief, Wild Symbol and other high value card symbols ranging from Ace to number 10. In the background game doesn’t have any background music during game play but does feature the usual gameplay sounds. The highlight of the game is the Line Up Bonus Feature.

The Police Badge symbol and Blank Bandit Face symbol in the game acts as the scatter symbol. This means that Scatter symbols can be scattered anywhere on the five reels to activate bonus feature provided three or more appear on the reels. Blank Bandit face Symbols appear only on reel 1, 3 and 5. 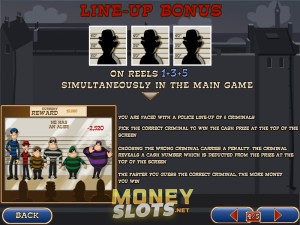 This feature is activated only during free Spins. If a Cop appears on immediate left or right of Theif, The thief symbols turn to extra wild and substitute for all other symbols starting from next spin. This feature is not triggered during the last free spin round. All extra Wild Symbols remain on place until the free spins end.

This game is triggered if 3 blank face Bandit Symbols appear simultaneously on reel 1, 3 and 5. In the game player has to choose the criminal among the lineup of 6 bandits. If the player chooses the right criminal a Bonus amount is awarded and the faster the player guesses the more amount is won.

This Slot Machine game is based on the theme of Police and Bandit Chase, The graphics and reels symbols all are design on the same theme. This game features the story of two Bandits named Skinny Larry and Tiny George who rob a bank and are chased by a Policeman named Slim McThin; and in the end get caught and are placed behind the bars.

All symbols pay from left to right, except scatter which pay any