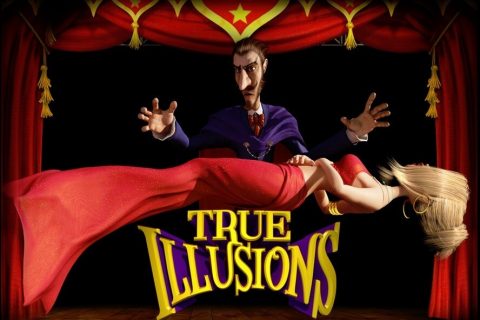 Andromeda review
Get up to $5,000 on your first five deposits
Play now

True Illusions slot game was released September 2011 by BetSoft Gaming.The 3D slot has 5 Reels and 30 Pay Lines. It is the Magic themed slot. The graphics of the game displays magic styling of Professor J Magick and his beautiful assistant Myra. The soundtrack music gives the theatre effect where magic show is going on and audience cheering in the background.Hot female assistant, coffin, guillotine, golden coin, dove, crystal ball, hat and linen populate the reels as regular game icons, whereas Wild, magician and playing cards are there to further boost the line wins.

One of the little features in True Illusions comes each time player have a winning spin. After each win, there’s an animation that shows the illusionist doing one of his trademark tricks – everything from pulling a rabbit out of his hat to making some coins appear out of thin air.

There is a wild symbol on the reels (easy to spot, as it is just the word “wild”), which can substitute for all of the normal symbols on the wheel, though it doesn’t offer any special multiplier to your wins. The wild symbols also play a key role in one of the main special features. On the center reel, there are stacked wilds – runs of three consecutive wild symbols that appear together. If player manage to land all three wilds on your reels, he will not only make the entire center reel wild for that spin, but will then get to see the magician lock his assistant in the center reel, which keeps the stacked wilds in place for up to seven spins in total.

The magician himself is a symbol, and serves a special purpose. He acts as the scatter symbol. While there are no prizes directly associated with hitting his symbols, landing three or more anywhere on the screen will result in a free spins mode. During these free spins, winning combinations will magically disappear, allowing other symbols to fall into place – potentially earning even more winnings.

Land three or more of the card symbols anywhere on the reels and it will activate the “Pick a Card, Any Card” bonus game. This classic magic trick will suddenly become a lot more rewarding, as player will have the opportunity to choose between any one of the magician’s cards. No matter which one he picks, he will earn an instant bonus.

True Illusions slot game is based on the Magic Theme. Magic (paranormal) – the use of paranormal methods to manipulate natural forces. Magic (illusion) – the art of appearing to perform supernatural feats.

All line pays are multiplied by line bet.

The biggest of all is the magician’s assistant; hitting five of her will earn you 500 coins.