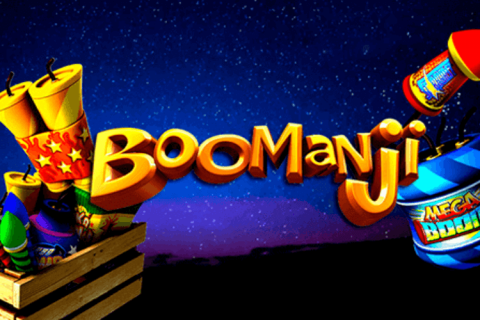 Andromeda review
Get up to $5,000 on your first five deposits
Play now

Boomanji slot game was released June 2013 by BetSoft Gaming. The slot has 10-line, 5-reel with bi-directional paylines. The game resembles fireworks theme. The graphics displays Pops, crackles, and wheezes fill the night sky, and as player spins, the symbols cascade into place, and wins appear in a bursting, colorful explosion. The sound track used in the game is the exciting music that is tell-tale signs of the celebratory atmosphere. The symbols in the game include purple bomb, single firework, two fireworks, three fireworks, ka pow, mega boom and turbo bomb, while crate firework acts as Expanding Wild symbol when it appears on reels 2, 3 or 4 and it awards a re-spin. 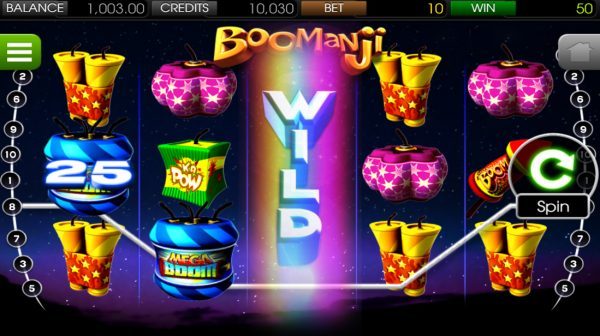 Pays Both Ways A normal slots game pays left to right. This means player have to line up the symbols starting from the left hand side in order to win. If the symbols lined up on the right hand side, player loses. In this game player have the benefit of being paid both ways. The game pays both left and right.

The game is based on fireworks theme wherein the loading page explodes into spectacular fireworks. All kinds of pyrotechnical devices are represented in this slot game which complements the theme. Fireworks are a class of explosive pyrotechnic devices. Fireworks take many forms to produce the four primary effects: noise, light, smoke and floating materials. The earliest documentation of fireworks dates back to 7th century China, where they were invented. 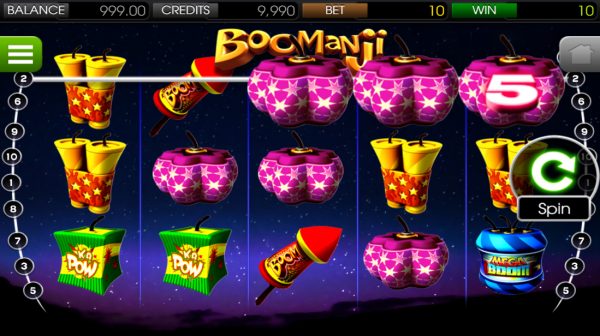 Three Fireworks is the highest paying icon in the game and while its maximum payout is 2,500, all payouts are multiplied by line bets, meaning five of these when betting 10 coins per line award whopping 25,000 coins. Coinciding wins on different paylines are added. All payouts are multiplied by line bet game pays both ways. All wins occurs on selected lines. Highest win only on each selected payline. 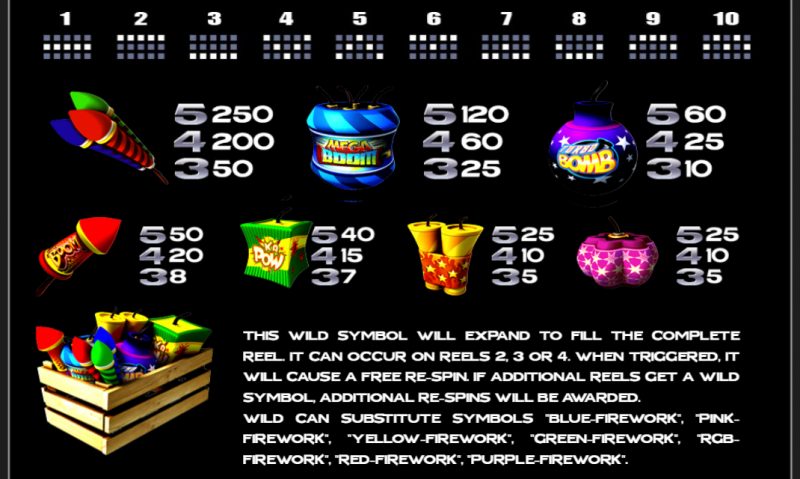 Boomanji is a flashy-splashy video pokie game by Malta-based BetSoft Gaming that you should enjoy. It brigns a sort of a festive atmosphere to wherever you are, no matter what device you're on (the mobile-friendly across all OS-platforms - iOS, Android, Windows, and, of course, is available for instant play of personal computers). So get the party started with this free spins no deposit pokie game in demo mode or pick one of the best online casino NZ list to win real money.