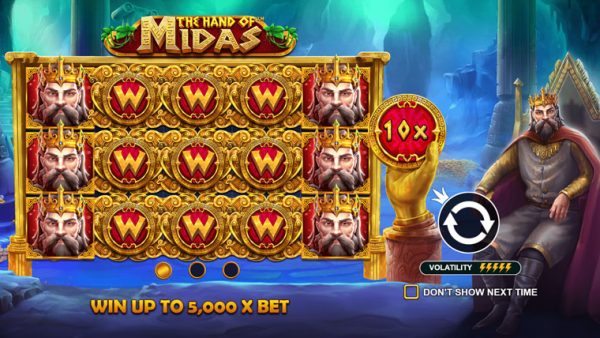 Let’s take a look back to the antique world! The Hand of Midas will help us immerse ourselves into the mystery of ancient times, it’s the newest slot coming from leading iGames supplier company Pragmatic Play for online casino players to enjoy the magic behind the Midas touch.

The game design takes a player to an enigmatic ancient temple atmosphere with intimidating gold-etched colonnades and all is enhanced by mesmerizing music tracks - The Hand of Midas keeps a player in suspense while the game is on.

The mythical gift of Midas to mysteriously transform everything he could touch into gold  soon turned into a burden and he ended up with his own daughter becoming a golden statue.

As you already guessed, this online real money title won't give you the opportunity to transform whatever you want into gold treasure, but it's really for the sake of good! 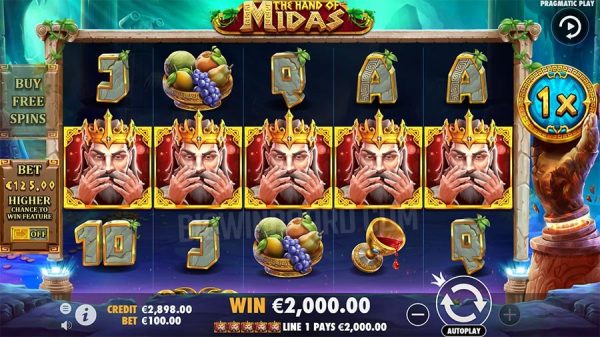 That being said, The Hand of Midas has still lots of fun to offer, whether it's collecting multiplier values joined by multiple Wilds or the Free Spins style that guarantees min winning of up to 30 times your entire bet!

The Hand of Midas is a vivid pokies game that will energize many casino players, particularly when you land 3, 4 or 5 matching symbols on paylines!

Greek-styled A, K, Q, J and 10 royal symbols perfectly suit the overall game scene. Other ones on the display are fruit-baskets, wine chalices, gold-filled chests, a gold princess, Dionysus and King Midas!

Whenever you see a symbol of King Midas himself you are about to win BIG! The most important and precious symbol in the entire game is King Midas, multiplying your total stake somewhere from 2x to 20 times. The game also flaunts nice bonus characteristics added to the slot.

Players will get a chance to buy Free spins round in some geographies.

Wild symbols stick to the position on the reels during the round, while at the same time adding to the multiplier score, so players might be able to gain even the wealth the Midas would have been envious of.

The Hand of Midas - is the newest pokies game by Pragmatic Play that produces five games per month you’ll be able to find titles from Pragmatic Play in some of the Top real money online casinos in New Zealand.