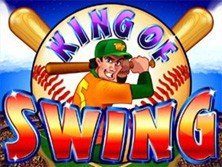 King of Swing (Slot Game) was released on 19th September 2009 by Realtime Gaming. The game has a set of 5 reels and 25 paylines. The graphics and visuals of the game are bright, colorful with detailed texture and art style. The theme of the game is inspired by Baseball. The symbols on the reels are theme oriented and include Baseball Diamond, Batter, Pitcher, Trophy, Glove, Shoes, Helmet, Game Program, Hotdog, Peanuts and Soda Pop. In the background the game has no constant music though some authentic gameplay sound effects could be heard on every spin and winning scored on the reels. The highlight of the game is Bonus Feature. The game also features Random Progressive Jackpot.Random Progressive Jackpot:The Random Progressive Jackpot in the game triggers at random. There are two modes in the Jackpot Minor Jackpot and Major Jackpot.The gameplay is available in fun and real play mode but with separate funds. Player can win it randomly during any paid game. Any denomination, number of coins and paylines can be bet to win the jackpot. The higher the wager on each game, the bigger the chances is to win the jackpot. One can’t win during the Bonus games. Starting amounts of Jackpots are:

King of Swing Features and Symbols

This Baseball Themed slot game has a set of 5 reels and 25 paylines. The coin size varies in the denominations of 0.01 up to 5.00 per line bet. The minimum bet amount is 0.01 and the maximum slot bet amount is 125.00 per spin. The maximum payout of the game other than the Random Progressive Jackpot is 5000 coins. The game features Wild Symbol, Wild Multiplier Symbol, Scatter Symbol and a Bonus Feature.
Wild Symbol

The Pitcher symbol in the game is the Wild symbol. This means it acts as a substitute for all other symbols except the scatter symbol to complete the winning combinations. This symbol only appears on reel 1, 2, 3 and 4.

The Batter symbol in the game is the Wild multiplier symbol. This means that it substitutes for all other symbols except the scatter symbol to complete the winning combinations and triples the payout of combinations it completes as Wild symbols. This symbol appears on reel 5.

This feature is triggered when Pitcher appears anywhere on reel 1 and the Batter appears anywhere on reel 5 during the same spin. In the game the batter attempts to hit balls thrown by the Pitcher. If the Batter misses, a Strike is registered and 1 Free Spin game is awarded. Each 1, 2 or 3 base hits awards 2, 3 or 5 Free Spins, respectively. Each Home Run awards 5 Free Spins and increases the Free Spin game Multiplier by 1x. Pitches continue until 3 Strikes have occurred or a total of 10 Pitches have been thrown. This game be re triggered.

This slot game is based on the theme of Baseball, which is a bat ball game and is played between two teams of 9 players each. The symbols on the reels depicts all the features of a Baseball game like Sods pops, Hot Dogs, Game Trophy and all the animations in the game have been designed in the same theme.