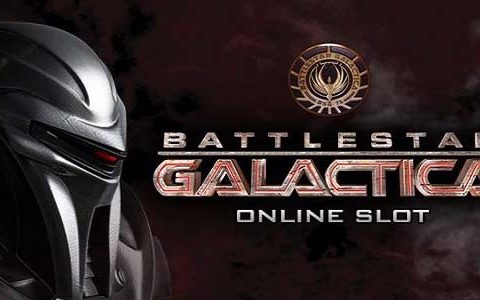 Battlestar Galactica™ Slot Game was released on 10th of December 2012 by Microgaming. The game has 5 reelas and 243 winlines. The graphics of the game are based on the theme of “Battlestar Galactica”, one of the oldest and most popular sci-fi franchises with numerous television and movie installations. The symbols on the reels include characters from the show like Starbuck, Apollo, Baltar, Six, Col. Tigh, Helo, Ellen and Tyrol. In the background There ia a constant music you in the game which is taken straight from the TV series. When player form winning combinations, short celebratory sounds that follow the theme of the game are programmed. The highlight of the game is the bonus game feature.

This slot can be played in three different modes; Normal Mode, Run Mode & Fight Mode. The wild symbol performs differently in all 3 modes. In Normal mode the wild appears stacked on reel one in both base game and in free spins and substitute for all other symbols except the scatter. In Run mode a Ion Storm can occur at any time and turn all five reels in to wild. And in Fight mode the random symbols can turn into wild at any time and the wild can split into two to create more winning combinations.

The Battlestar symbol is the scatter symbol in this Battlestar Galactica slot. Three, four or five of this symbol will trigger scatter payouts in between 750x, 1500x & 7500x total bet plus 15 free spins.

The Battlestar Galactica slot free spins feature triggers when three or more of the scatter Battlestar appear across the reels. During the feature players will be awarded with 15 free spins with a 3x multiplier. This feature can be re-trigger at any moment. Lucky player will get the chance to win upto 1,400,000 coins during the feature.

The Fight Mode Free Spins also trigger when three or more of the scatter Battlestar appear across the reels. This feature awards 5 free spins with the options to re-trigger the same number of additional free spins at any time during the feature.

The game’s theme is based on the famous sci-fi franchise Battlestar Galactica™. Battlestar Galactica, the story is mainly about a human civilization that left their ancestral homeworld of Kobol and went to live in a group of planets called the Twelve Colonies. The Twelve Colonies have warred for decades with Cylons (a cybernetic race) whose objective is to annihilate the human race. They devised a way to trick the humans by offering peace, and when they were successful, they heavily attacked the Twelve Colonies and the Colonial Fleet of starships that protect them. Of the entire Colonial Fleet, only the Battlestar Galactica, an enormous spacecraft carrier and battleship, seems to have survived the Cylon attack. With the guidance of Commander Adama, the Galactica and the pilots of “Viper fighters” lead a fugitive fleet of survivors, in search of the legendary 13th colony known as Earth.

The following is the breakdown of the paytable: